Listen to this: "Winter's Crossing" 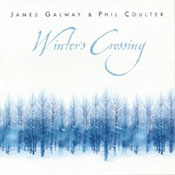 If you’re anything like me, I’ll jump out of my skin if I hear Springsteen’s “Santa Claus is Comin’ to Town” or Bon Jovi’s “Please Come Home for Christmas” one more time. It seems like these two songs – and a handful of other tired old Christmas songs – are the only tunes in the playlist at the two Boston-based radio stations that are now playing holiday music 24 hours a day.
If you need a break, might I recommend my favorite holiday CD? It’s called “Winter’s Crossing”, released in 1998 by James Galway and Phil Coulter. As it states on the back of the CD, it’s “An inspiring collection of seasonal music…from spirited jigs to touching melodies, Winter’s Crossing tells the tale of the men and women who braved a rough ocean to come to America from Northern Ireland, full of hope and strength.”
I’ve enjoyed this compilation for several years now, and even bought the accompanying piano songbook, so I can play along with the CD. Check out Winter’s Crossing on Amazon.com and let me know what you think.
Posted by Mike at 1:55 PM 1 comment:

Imagine my horror when I pulled up behind a car at a stoplight in New Jersey last Wednesday afternoon, and saw a “Palin” sticker in the rear window of the Jaguar in front of me. No disrespect to my Jersey friends – the car had a Virginia license plate. Now imagine my horror and shock when - about 30 hours later - I pulled up behind the same car at the same stoplight late on Thanksgiving evening. What do you think this all means? 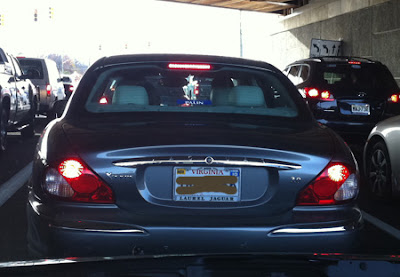 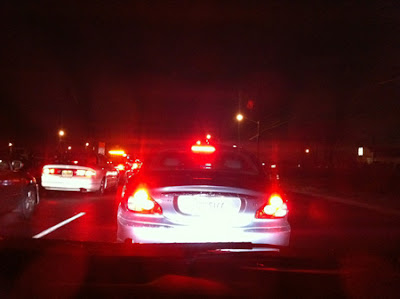 "Look at THAT" indeed

Sandra Lee has a couple of TV shows on the "Food Network" - and as anybody who knows me will attest, I'll watch pretty much any cooking show. But Sandra takes the cake (pun intended) when it comes to food "train wrecks". Case in point...

My favorite YouTube user comment on this video? "For a nicer presentation you can serve it wrapped in a﻿ diaper."
Posted by Mike at 8:57 PM 5 comments:

Here's the "after" shot. He's nice and fresh...and he smells good! 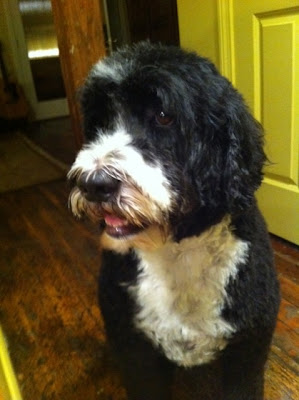 I am blind, but soon I will see 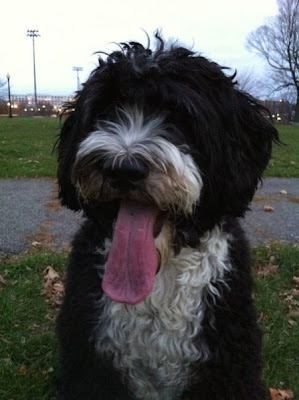 It's haircut day! Otis has not been to the groomer's since before our vacation in Provincetown last August, so he's a wooly mammoth. Today he gets a shampoo and a cut, and will be ready to greet family on Thanksgiving!
Posted by Mike at 8:46 AM 1 comment:

What do you get when you combine a pound of softened butter, 12 cups of flour, a dozen eggs, 9 cups of sliced almonds, along with a good amount of sugar, a dash of baking powder, and some pure vanilla extract? A huge bowl of dough, which with a sturdy wooden spoon and a lot of patience, eventually is transformed into dozens of almond biscotti.
I've been making biscotti twice year - for Thanksgiving and Christmas - for at least a decade. The running joke is that if I ever showed up on Thanksgiving day without a box of biscotti, I'd be run out of town on the next rail. A few years ago, right before my sister-in-law Nora showed up, I hid the biscotti, leaving just a few crumbs on the big cookie plate. I tried to convince her that we had eaten all the cookies, but with a big smile on her face, and just a hint of fear in her eyes, she finally talked me into retrieving the hidden stash so she could enjoy a pre-dinner cookie.
These cookies aren't hard to make -- they just take time. I usually make a weekend-long project of it: bake the loaves on Friday night, cut the loaves into slices and bake them on Saturday, and then recruit Peter to help me dip the baked slices into melted dark chocolate on Sunday. And when I make a batch, I sextuple the recipe, multiplying the quantity of each ingredient by six. (Yes, there is math involved.)
I think I clipped this recipe from The Boston Globe, and over the years, I've tinkered with adding different kinds of nuts or using white instead of dark chocolate for dipping. But I've come to the conclusion that I like the original recipe best. The standard recipe appears below: you'll have to do your own math if you want to double, triple, or sextuple your yield.
Two tips: Years of experience have taught me to use those silicone baking pads on my cookie sheets - there's a good amount of butter in the recipe and the cookies tend to brown too quickly if I don't use them. And when you're slicing the logs, use a serrated knife. A regular, straight-edged kitchen knife will cause your cookies to crumble, and well, that's the way the cookie crumbles.
Almond Biscotti 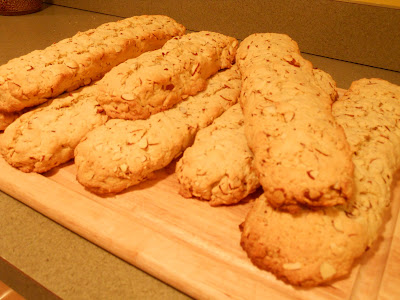 Loaves of biscotti after the first baking. 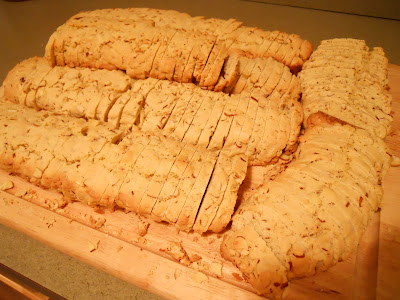 Slice the loaves and set the oven to 325 degrees for the second baking. 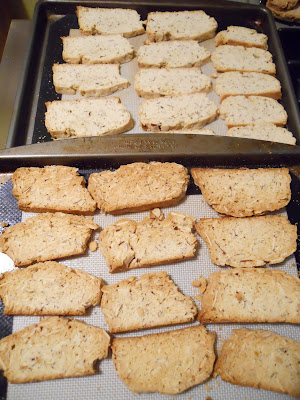 The slices should be baked on both sides until toasty brown. 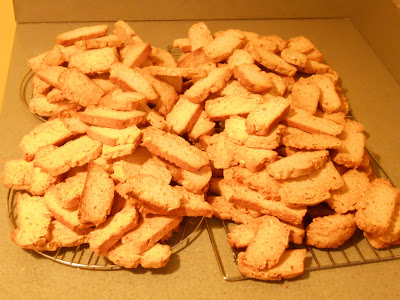 Let the slices cool before dipping each one into melted chocolate. 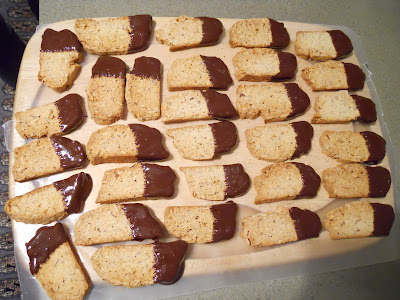 “Fair & Balanced” and a moment of being real

This video has been making the rounds, so excuse me if you’ve already seen it. But it seems that some staff at FOX News, who have set themselves up to be the conservative cheerleader camp for Sarah Palin, are not above taking shots at Mama Grizzly (at least when they think they’re not being videotaped). On Thursday, this video was leaked online, and shows two FOX reporters poking fun at Palin’s new Alaska-based reality TV program. A big deal? Probably not…but it makes me glad to see that these folks aren’t 100% robots and are able to laugh at the sheer ridiculousness that is Sarah Palin.

And for what it’s worth – I caught a snippet of a Larry King interview with George (Senior) and Barbara Bush. Mrs. Bush was asked what she thought of Sarah Palin. “I sat next to her once,” said the former First Lady. “Thought she was beautiful. And she’s very happy in Alaska. And I hope she’ll stay there.” SNAP!
Posted by Mike at 10:22 AM 2 comments:

Otis officially graduated from therapy dog training this evening, which means that as a family, we're now a therapy team that's certified to visit hospitals, nursing homes, rehab facilities, and other organizations. The "training" provided a good orientation on what we can expect on our visits - lots of common sense applies here - and gave the folks from Dog B.O.N.E.S. a chance to evaluate our dog's temperment and social skills. We expect to soon start receiving regular e-mails about local facilities that are requesting dog visits. We even ordered Otis a special "therapy dog" vest that will help facility staff identify him as a welcome guest. Look forward to our first visit! Here are some photos from tonight's graduation ceremony. 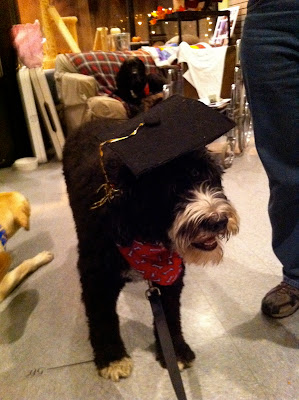 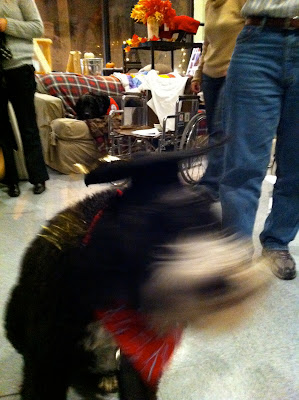 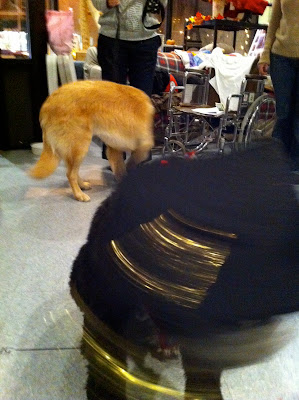 A friend indeed, and a friend in training

My sister-in-law Nora sent me a link to this video today. What a lovely tribute to our furry friends who have gone before us. Makes you want to give your dog a hug, doesn't it? Ahhh…Jimmy Stewart: they don’t make ‘em like that anymore in Hollywood.

Otis got lots of attention and affection tonight, the first night of his three-session training on how to become a therapy dog. It’s something I’ve thought about doing for a long time, but never got around to. But I’ve been feeling awfully sentimental about Otis recently, and started thinking about the joy and companionship he could bring to other people who could use a smile. So we signed up with “Dog B.O.N.E.S.” (Dogs Building Opportunities for Nurturing and Emotional Support), a nonprofit, volunteer organization based here in Massachusetts.
After we complete our three training sessions, we’ll be able to visit hospitals, nursing homes, rehabilitation centers, hospices and other facilities that provide care to the elderly, the disabled, or to young folks. They even have a new program where your dog becomes a “reading dog” and visits children who have trouble reading, and sits quietly as a supportive, non-judgmental listener.
Tonight’s class was an overview of the program, and Otis was one of five dogs enrolled in this month’s training. I’ll keep you posted on our progress. Here’s a picture from tonight’s event. 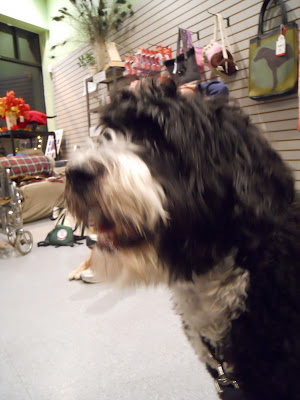 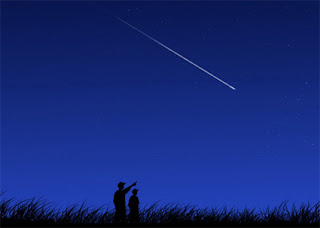 Did you see it last night? We were walking back from dinner at the Farragut House in South Boston when I happened to look up and saw a shooting star streak across the sky. It had a long, sparkling tail and was moving fast. So fast, in fact, that by the time I point skywards and could get the word, "Look!" out of my mouth, Peter and our friend Ian had missed the show. Wikipedia tells me that a shooting star is actually the common name for the visible path of a meteoroid as it enters the atmosphere to become a meteor. I saw on Universal Hub (a Boston-based news blog) this morning that folks from across the region saw the shooting star, so my sighting has been confirmed, and wasn't just a hallucination caused by the Guiness I had with my platter of fried clams.
Posted by Mike at 9:21 AM No comments: