What did I do wrong, Christopher Kimball?

Ultimately, it was nothing a sprinkling of confectioner’s sugar and cocoa powder couldn’t fix. But imagine my dismay when today’s attempt at the chocolate pound cake recipe from Cook’s Country magazine, the know-it-all source for sure-fire recipes that have been tested and re-tested in the “America’s Test Kitchen” right here in New England, oozed over the top of my loaf pan, and then promptly deflated while cooling!

As you can see in the “before” shot below, it was an overflow of volcanic proportions. The cake hadn’t been in the oven for five minutes before I smelled something burning. When I opened the oven door, I saw my delicious, buttery batter running down all four sides of the loaf pan and dripping onto the oven floor. After a quick clean-up, I put the loaf pan on a foil-lined baking sheet and it went back into the oven. Here’s what it looked like: 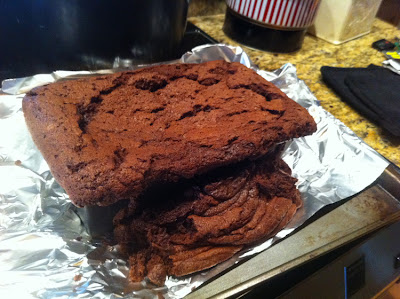 After it cooled and I removed the big hunks of bubbled-over cake (actually crunchy and delicious) from the edges of the pan, I turned the cake onto a cutting board and began carving. After a few strategic slices and the aforementioned sugar dusting, here’s what we ended up with: 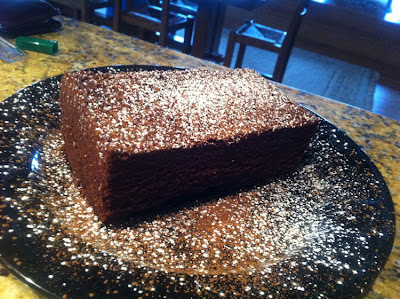 If you’re a regular reader, you’ll know that I usually post recipes for dishes I’ve tried. And although this chocolate pound cake is moist and delicious (it does, after all, contain two sticks of butter), I won’t be reprinting this recipe. Who knows? Maybe I’ll even hear from Christopher Kimball or his staff, telling what my mis-step might have been. I’ve re-read the recipe twice and it seems I followed it to the letter.

In any case, my carved and sugared chocolate pound cake will on the menu tonight as we’re hosting some friends for dinner. Here’s hoping the meatloaf and baked potatoes come out OK. I can only handle one kitchen disaster a day.
Posted by Mike at 3:53 PM 2 comments: 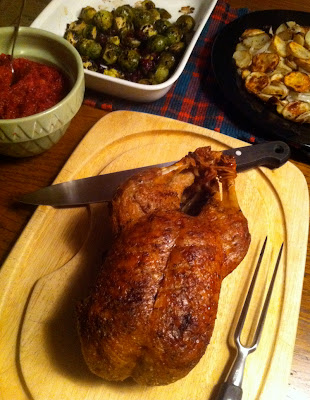 We had our big homemade Christmas feast yesterday…a nice roasted duck (crispy-skinned thanks to a ‘low and slow’ afternoon in the oven), a potato gallatte (which I believe is French for “falls apart when you try to transfer to a serving platter” – but was delicious nonetheless), roasted Brussels sprouts with a balsamic syrup and dried cranberries, tart cranberry sauce, and a mincemeat pie (homemade crust and a heavily doctored-up bottle of Irish mincemeat from the grocery store).

Here’s the recipe for the Brussels sprouts, courtesy of The Pioneer Woman.
3 pounds Brussels sprouts
1/2 cup olive oil
salt And pepper
1 cup balsamic vinegar
1/2 cup sugar
1 cup dried cranberries
After dinner, it was time for a quick shower and a meet-up with our friend Marcia (a self-proclaimed “little Jewish girl with no plans for Christmas eve”) at Taj, formerly known as the Ritz-Carlton. Located right across the street from Boston Common, the oldest city park in the United States, the Taj was beautifully decorated for the holidays, and the main bar was surprisingly full, considering it was Christmas Eve. After a round (or two) of cocktails, we walked two blocks to the Arlington Street Church, for its Unitarian Universalist Christmas Eve service.
I’m pleased to report that I was not struck down by lightning as I crossed the threshold into the church – you might say it’s been a while since I found myself in a house of worship. The service was lovely and was highlighted by a spirited sermon by Reverend Kim Crawford Harvie, all about finding the joy and miracles that happen around us every day, and by several performances by the Boston Gay Men’s Chorus, including a rousing take on Katy Perry’s “Firework”.
This morning, we slept late (any time after 6:30 am is “late” for us), had a delicious breakfast with lots of hot cups of coffee, read the Boston Sunday Globe, and then opened a few presents. Peter got me a DVD of “A Child’s Christmas in Wales”, a sweet holiday movie based on a story by Dylan Thomas of a grandfather sharing his favorite Christmas memories with his grandson. He also gave me the “James Taylor at Christmas” CD, which I love. Check out his take on “River”, a hauntingly beautiful rendition of a Joni Mitchell song from the early 1970s.


We then took a nap and later visited to Castle Island so Otis could work off some of his Christmas energy by chasing a tennis ball. In pursuit of one wayward toss, Otis ran smack into an elderly gentleman on the paved walkway, knocking him down to his knees. He was surprised, luckily unhurt, and extremely gracious.
We ended the holiday at our friends Julie and Tom’s home with lots of good food, drink, and sweets, and caught up with their families, including Julie’s mom, who we hadn’t seen in three years.
And that, folks, is what I did on my Christmas vacation.
Posted by Mike at 10:47 PM 5 comments:

I hadn't seen this in a couple of years, but my buddy who blogs over at "Spirit of Saint Lewis" posted this clip of Jimmy Stewart on "The Tonight Show" reading a poem he wrote about his dog, Beau. I've never been able to watch this lovely tribute without tearing up. Excuse me while I go give Otis a hug.

Holiday weekend on the horizon...full speed ahead!

Four days. Count ‘em. Four whole days. That’s what lies ahead of me. No alarm clocks. No to-do lists. No meetings. No nothing but relaxing, grabbing naps, trying to catch up with some reading, and of course, enjoying a long holiday weekend with Peter and Otis. Four days off – this has been a long time coming.
To kick the holiday off, we watched one of my guilty pleasure movies -- "Die Hard". It's one of those movies that if I catch while I'm flipping channels, I have to stop and watch. But Peter had never seen it and it does take place at Christmas time, so I guess it's technically a holiday film. Yippee Ki Yay!
Posted by Mike at 10:36 PM 2 comments:

Out of my control

So I am here at the local Toyota dealership bright and early for the 30,000 mile service on my car. And while I am doing my best to take advantage of this time away from desk, it is hard to concentrate with the louder-than-needed Christmas music playing in the waiting room. Seems like all of the other folks waiting for their cars are reading their Kindles and tapping their feet along with the music. To top it all off, they just played Springsteen's "Santa Claus is coming to town". That is what I call "cruel and unusual" punishment. Bah humbug indeed. Maybe I should cut back on my coffee consumption?
Posted by Mike at 8:14 AM 2 comments:

You gonna pay for that steak, honey?

‘Tis the season for making chocolate-dipped biscotti and White Trash Christmas Nuggets, listening to “Christmas Portrait” by The Carpenters…and shoplifting? According to a report in Ad Week, more and more people are letting their (sticky) fingers do the shopping this year – an unbelievable 1 in 11 people walks out of a store with at least one item they haven’t paid for. The report claims 75 percent of shoplifters are adults, and that using that five-finger discount has been on the rise for the past five years due to the rocky economy.
I was also surprised to learn that the #1 most shoplifted item is …drum roll, please… filet mignon! Now I love me a good steak, but I can’t imagine sticking a couple of filets under my arm and not having my guilty-looking face or full body sweat give me away to the cashier. 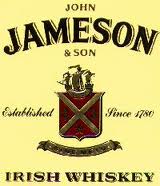 Other things on the list of most purloined items?
I must say this list surprised me and made me a little sad. Seventy percent of shoplifters say they didn't plan to shoplift, says Barbara Staib from the National Association of Shoplifting Prevention, “but add a sense of desperation because of the economy and holiday pressures, and you have the recipe for theft soup."
So if you saw someone at your local supermarket stick a package of filet mignon under their jacket, would you report it to the store manager? Would it make a difference if the thief were a hungry-looking old lady? A nicely-dressed businessman? A kid?
Posted by Mike at 6:09 PM 4 comments: